Now, a release package: looks so abstract. How do you know it is useful? When the number of frustrated users or dissatisfied customers decreases because they now know how to use the invoice application correctly. The IT department in this case had a lot of support data they had gathered through their ticketing tool, they used it to vote for a release to be created, at the right time. So people actually felt cared for when IT did something for them, that is, scheduling a deployment of the training material.

ITIL4 talks about service in terms of value, outcomes, risks, and costs. Let us look at the above example of the training release : The purpose of delivering user training was to help people use the service in a focused manner. The part of the statement that says ‘use the service’ refers to the contribution of that user training to the ‘utility’ of the service, or ‘what the service does’. The part ‘in a focused way’ refers to user training’s contribution to ‘warranty’ of a service, or ‘how the service performs’. In this example, IT did it by providing a ready perspective to end users through training. The unnecessary ‘risks and costs’ of not using the service correctly were reduced, and an ‘output’ was “provided-the training itself. The users participated and obtained information- the ‘outcome’. 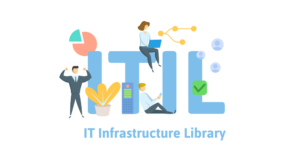 What is ‘service management’, according to ITIL4? Let us refer to the IT department mentioned above. They run ‘managed’ services which get five-star Customer Satisfaction ratings. What do mean by ‘managed’? The release occurred at a point in time, which can be recorded and measured. Thus, ITIL4 talks about a set of measurable activity which can be compiled and reported to the customers or users. That gives the latter a sense of being ‘involved’ in the IT department’s activity, which believe me, brings about a sense of being ‘valued’. Hence, they feel satisfied with the services they receive from IT. Well, that is the IT department’s ‘capability’ to manage services. That was about the ‘provider’ side.

What about the receivers, or ‘consumers’ in ITIL4 terms? Decentralization of power and leadership in today’s corporate scenario has led to separation of consumer roles into three segments: people who ‘pay’ for the services-the ‘sponsors’, people who ‘negotiate’ the services and their benefits- the ‘customers’, and people who ‘use’ the services or the ‘users’. These roles are often combined in several ways.

Is that enough? No, there has to be a win-win partnership between them, due to which, can both sides grow! In the above example of the IT department, the angry users/dissatisfied customers ‘felt’ that their needs were taken care of in the end. They participated in the scheme of things, albeit by letting the department know that they were not satisfied, and that was the beginning of ‘value co-creation’! Value co-creation is simultaneous value creation for all the parties, or ‘stakeholders’ involved. That, is the true meaning of a ‘service relationship’. There are shared goals involved; in this case the user community wanted to be completely satisfied using the service, and the IT department wanted to ensure that the users and customers were satisfied using their services.

To reiterate, ITIL 4 is a set of best practices, that is general rubric of activity which is widely known to produce results in any IT organisation. A key benefit is creating ‘value’ or usefulness together with customers, sponsors, users, suppliers, and whoever else who may be responsible in a supply chain.

That was a very brief exposition of all the key concepts involved in ITIL4. Interested in knowing more about ITIL4 and how it can be adopted by your organisation? Then please sign up for an ITIL4 Foundation Training by writing to support@unichrone.com ! Or contact:9886140602 .